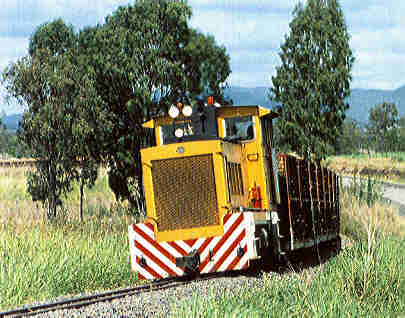 Formerly known as sugar tramways, Queensland's sugar railways have come a long way since they were first established as steam and horse hauled tramways in the 1880s.

Today they represent what is probably the world's most advanced series of 610 mm gauge railways. Along a 1,750 km coastal strip stretching from just north of Brisbane to just north of Cairns you will find:

The articles listed below provide an insight into the history and current operations of these railways. They regularly feature in our journal Light Railways.

An introduction to current sugar cane railway operations, together with a number of illustrations of locomotives and equipment.

An introduction to Australia's sugar industry from the time of its foundation to the present day. This article explains the importance of the Colonial Sugar Refining Company, and the transition from the plantation system to the central mill system.

Whilst not specifically covering sugar tramways, it gives an historical background to the industry, which is now a major Australian user of special purpose railways.

A bibliography is included.

An overview of the development of Australia's sugar tramways, starting from the time when rivers were used in preference to tramways for the transport of sugar cane.

It includes a summary of the development of steam and diesel locomotives used in the industry.

A listing of all locomotives which have passed out of sugar industry ownership, and which are either thought to still exist, or have been scrapped after some form of preservation.

A listing of all locomotives owned by the Australian sugar industry in 2000.

A listing of all locomotives owned by the Australian sugar industry in 2005.

Adapted and updated from "Australian Sugar Tramways - The Challenge of the 1980s" published in Light Railways No.66, October 1979.